ASICs continue to grow in size and complexities and in this case, traditional verification techniques are not sufficient to achieve verification confidence. In the complex designs, debugging simulations is an ever increasing challenge. To address these challenges assertion based verification is found. Design and Verification engineers can place assertions in design or bind to design which will be useful to monitor, report and take action when incorrect behavior is detected. Assertions are playing major role in test bench development which helps achieving maximum confidence on bug free design. Moreover it can be used in simulations as well as in formal verification.It enables engineers to leverage the strength for block level, subsystem level and for chip level verification in order to reduce the overall effort and efficient verification closure. System Verilog Assertions are setting up a viable and effective standard in the design and verification. An assertion adds an advantage in debugging process and makes complex simulation debug easy.

Below figure on block diagram gives brief idea on where we put the assertions in test bench development. As we can see assertion are placed on module boundaries to signals to monitor DUT interface 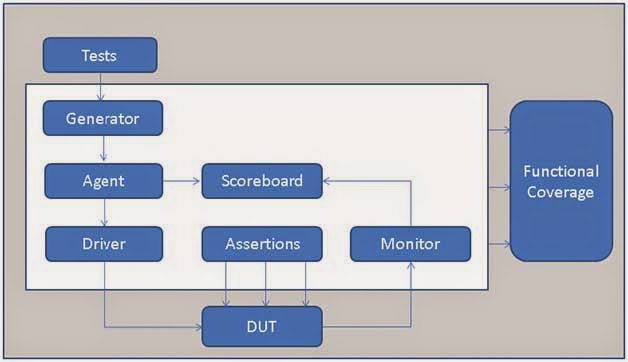 The introduction of SVA added the ability to perform immediate and concurrent assertions for Design as well as for Verification. Assertions are used to validate design whether it is working correctly or not. Assertions can be useful to make sure ‘How good is the test case?’ Furthermore, it provides a means to measure the quality of the verification process through the creation of coverage using cover property feature of System Verilog assertion.

In System Verilog there are two types of assertions:

System Verilog is nothing but an extension of Verilog;it has everything to support Verilog with lots of new features for Verification as well as for design.Usually Verification engineers add assertions to a design after the HDL models have been written which means placing the assertions on module boundaries to signals within the model, or modifying the design models to insert assertions within the code.

Design Engineers can write assertion within a design while the HDL models are being coded. What type of assertions and scenario designer should provide within design need to decide before design work begins. Verification engineer define the assertion scenario during the test bench architecture. System Verilog assertions are mostly hooked up at the DUT interface level where it can continuously check protocol and functional activities.

Assertions controllability and why is it important?

Controllability is very important in Assertion design. There are two methods I called to control the assertions: You can also find the Assertion controlabilty blog post from "SVA Control Method" !

Dynamic method is very popular where engineers required to control the assertion dynamically based on the test scenario they wants to execute. In today’s complex SoCs and their verification, Dynamic (D) method is popular as we regress the erroneous scenario to make sure DUT behaves accordingly. In this type of simulations engineers can dynamically switch on/off assertions.

System Verilog includes system calls for controlling the execution of assertions during simulations. There are three types of D Method.

By using $assertoff, the assertions specified as argument of this function will be turned off until a $asserton is executed. This way you can control assertions dynamically. Using these system tasks you can make your assertions dynamic and based on requirement we can make them enable or disable. Furthermore we can even kill using $assertkill.Dynamic control of Assertions can be used to turn off assertions during reset and initialization or during simulation erroneous protocol behavior.

To control assertion statically we can use System Verilog’s pre-processing capabilities. In this method assertions are generally ignored during the compilation phase w.r.t to `ifdef. This way we can build a different model by defining a different defines. Pre-processing defines can be applied to any place of the code and thus we can control the assertion as per need.

`endif
SVA proved to be a powerful assertion language; it provides several ways to control assertion. There are various reasons why assertions controllability is important, some important points are mentioned below:
Coding Guidelines for SVA
Note : Same article is published on Electronicsmaker.com and can be found from here